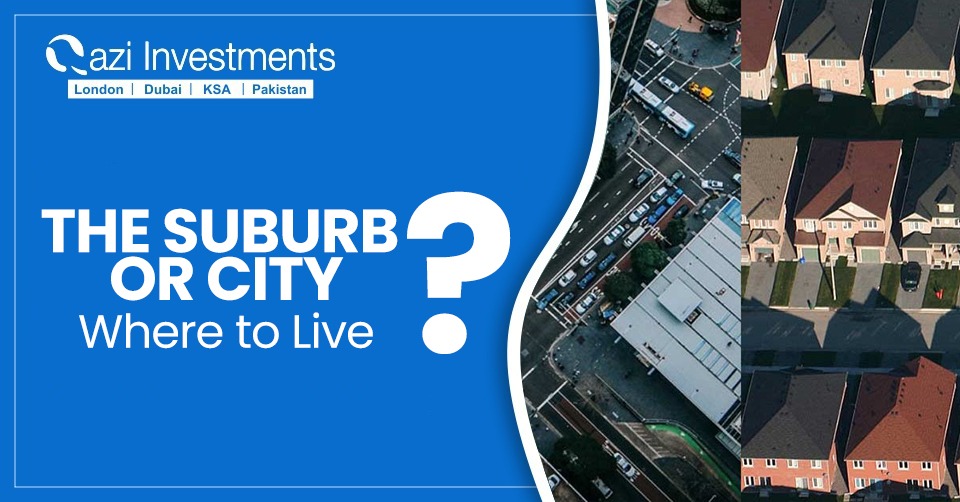 The Suburb or City? Where to live?

A city is a sizable, densely inhabited place that acts as the local center for markets, banking, and other economic activities. Many individuals would rather live outside of the city since it is so congested and hectic, even though they must travel there daily whereas a suburb is an unincorporated section of a city that is used for habitation. People may commute from the suburb to the city because suburbs are only a short drive away. The major distinction between a city and a suburb is that the latter has a lower population density than the former.
Here are some plus points of both city and suburbs by which you can easily comprehend the importance of both.

Suburbs are better because it is:

Families are able to save more money each year by deciding to live in the suburbs as compared to a metropolis. It was shown that city-dwelling families in the Pakistan typically pay at least 100,000 Rs more year (in many cases, the amount is substantially greater) only on the expenditures of basic housing. The cost of homes is considerably lower in the suburbs. Not to mention that they are often larger than available real estate in any city. Therefore, suburban living frequently provides a better value for money, especially for millennials.

Living in the suburbs gives you an extra 300 square feet of living area on average. If you had an extra 300 square feet of space, what would you do with it? Building a guest room or an office desk at home? There are countless options. However, more significant than aesthetics is the fact that these additional feet give the impression of room. This is important because living in cramped quarters, like in New York, where micro apartments are more common, can have a bad effect on your mental health and how you nurture your kids. There is also the added worry that living in a large metropolis, especially during a pandemic, might negatively impact your physical health due to the lack of space for social isolation and the excess of stress, noise, and dirty air.

We tend to link crime more closely with metropolitan regions than we do with suburban ones. You may blame TV shows like The Wire or eye-catching news headlines, not to mention high-profile examples of police brutality in cities. Our concerns are confirmed by FBI statistics and data from the National Center for Victims of Crime. These sources indicate that big cities have greater rates of property crime, residential burglaries, larceny, and violent crime than neighboring suburban regions. Crime-wise, suburban living may sometimes be safer.

Big City Life is better because it is:

People from far-flung regions have been migrating to cities throughout the past few centuries in search of better prospects. Since the city provided them with greater and more varied employment opportunities than the countryside, many immigrants chose to live there.

Only 12 cities had more than a million residents in 1900. More than half of the world’s population now resides in urban areas. Cities have expanded significantly, bringing new cultures and social variety with them. Even today, many cities throughout the globe have neighborhoods named after early pioneers, such as Chinatown, Little Italy, Little India, etc. This “melting pot” effect gives us access to experiences like trying delicacies from many cultures, meeting new people from various backgrounds, viewing works of art from across the world, and gaining exposure to various civilizations that we wouldn’t otherwise have without boarding a plane.

Families need at least one automobile to live in the suburbs. For transportation, children and teenagers who don’t yet possess a driver’s license or access to a car are entirely dependent on their parents. Growing up in the suburbs places a significant emphasis on using private transportation, whether it is for getting to school, participating in after-school activities, or simply going shopping. Not to mention the travel time or distance from your house to your destination in traffic and let’s not overlook the monthly expenses for gasoline and auto insurance. In comparison, it is simpler and less expensive to commute within cities. City life offers greater mobility and independence thanks to readily available public transit. In practically every European city, there are underground subways and above-ground trains, trams, and light-rail systems in service. In actuality, public transit is a major component of city planning. While trains and metros are not subject to traffic, buses have designated lanes. This makes commuting times shorter. Additionally, taking public transit has the added advantage of allowing users to quickly and conveniently explore new parts of their city that they might otherwise miss if driving. A lot more to do It goes without saying that metropolitan regions get more tourists than suburban ones. Businesses and attractions, such as restaurants, parks, stores, and nightlife, are seized by tourists. As a result, urban life may provide a broader range of leisure, educational, and cultural alternatives than suburban living. There are several public activities that are frequently free or reasonably priced for city inhabitants in addition to the museums, public galleries, and educational facilities that may be found in cities. In addition to having access to resources for learning about art, culture, and history, city people also enjoy public transit that makes a variety of cultural experiences accessible.

Saving money by relocating to the suburbs might give you access to more real estate and potentially a safer neighborhood. Living in a city, however, exposes you to many cultures and forms of entertainment that are simpler to reach via public transit.

How Hawks Melbourne City will revolutionize the way of living?

In practically every element of social life, Pakistan offers an astounding variety of possibilities. ...