"Capital Smart City: Another master piece from the Capital Smart City launched one of its kind innovative & futuristic development - One Capital Residence." " Nova City Islamabad has announced Nova City World - Overseas Block for its valuable customers. This state-of-the-art complex will offer luxurious modern amenities. " "Nova City Frist valeting held, 21st May 2022." Alhumdulillah Congratulations everyone. LSC has taken another step towards our commitments." " RUDN Enclave: Development work in RUDN Enclave is on full swing. FWO also started construction of proposed Rawalpindi Ring Road." "Lahore Smart City: Allocation of plots in sector A & B of Lahore Smart City will be started from 1st June 2022." "Capital Smart City: Selection of Harmony Park, Overseas East and Central has been started. Last date for selection is 22nd, May 2022, balloting will be held on 30th May, 2022."

In order to improve public service delivery, Prime Minister Imran Khan announced on Tuesday the development of an exclusive category on the Pakistan Citizen Portal (PCP) for filing complaints about land grabbing or the Qabza mafia.

The Prime Minister announced the inclusion of the category, stating that the aim is to further tighten the noose around Pakistan’s land grabbing mafia. According to an official release, the prime minister stated that the federal government was committed to preventing land grabs across the state. Imran Khan has ordered strict legal measures as per law at various tiers of the administration, both at the federal and provincial levels to make this possible. 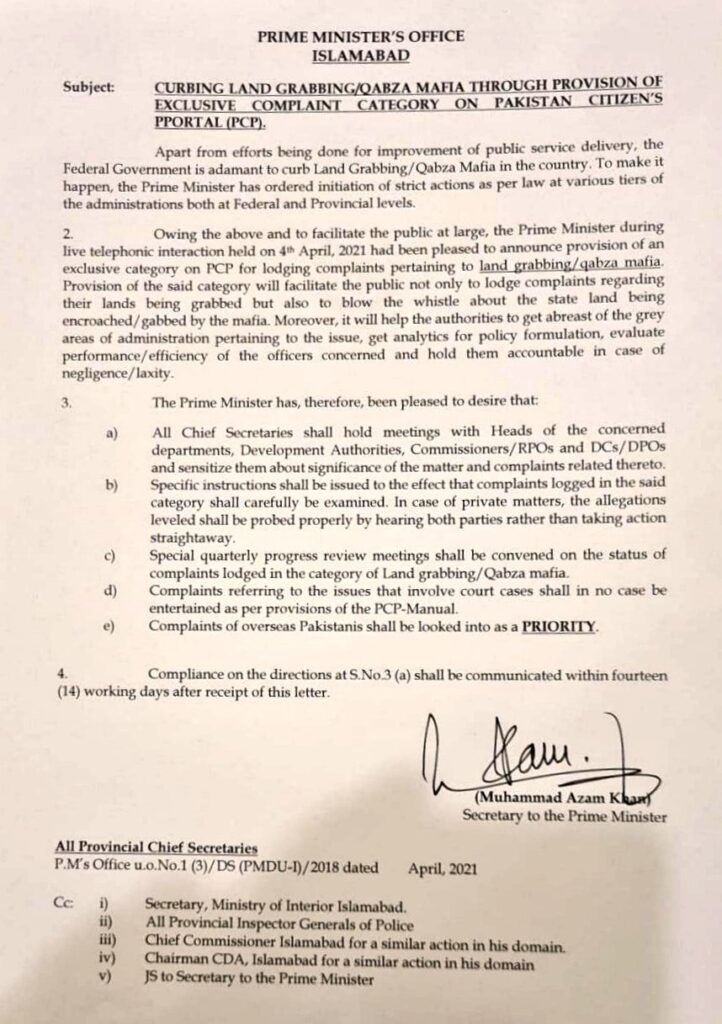 “To facilitate the public at large, the Prime Minister during live telephonic interaction held on 4 April, 2021 had been pleased to announce provision of an exclusive category on PCP for lodging complaints pertaining to land grabbing/Qabza Mafia,” read the official statement.

“As per the terms of the PCP-Manual, complaints relating to matters involving court cases will not be entertained,” the Prime Minister’s Office said. “Complaints from Pakistanis living abroad will be investigated as a matter of PRIORITY.”

The government hopes that the new category would also assist officials in learning about the issue’s grey areas of administration, obtaining analysis for policy development, evaluating the officers’ competence and effectiveness, and holding them responsible in the event of incompetence.

“Specific guidelines will be given to the effect that allegations filed under the new category will be closely examined,” the statement continued. In the case of private affairs, the complaints should be thoroughly investigated after hearing all sides before taking action.”