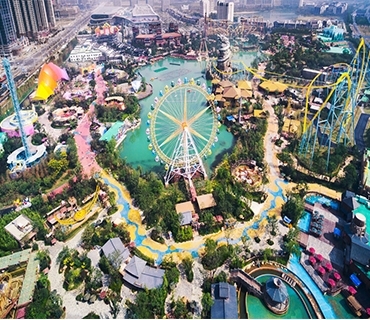 While the Theme Park is a component of the visitor’s attractions, it has features, especially those of the entertainment, which distinguishes the Theme Park from other types of tourist attractions. Primarily these attractions are designed by human beings. These are developed by strong capital investment; with a combination of amusement, different kinds of food and drinks, shops, and a totally different environment from outside.
Different people have their own ideas about Theme Parks. Some say that an amusement park has themes, where food, costumes, amusement, shops, and rides are the part of it; while according to some people theme park is an escape – an opportunity to get away from the big pressures of the day.

A theme is the main element of the public interaction selected for the layout, construction, and running of that kind of park when the park is intended to focus on. The choice of the theme is therefore extremely important for the park’s operations. In general, theme parks seek to create an environment of a particular place and time, and typically emphasize a dominant theme around which design, scenery, exhibits, displays, food services, costumed staff, retail outlets are arranged.
Though to give tourists one major theme in the theme parks, most theme parks actually include several subjects in terms of different attractions and conceptual zones. For example, “Nature” is the major topic of Ocean Park Hong Kong, but it contains many other topics, including animals, plants, and ocean life.

In Pakistan, a theme park will be constructed in Capital Smart City Islamabad which will be the first of its kind having themes like plants, animals, ocean, adventurous and ancient life. Theme parks can typically be categorized as follows in styles and associated features.
If we talk about adventurous themes, it may have excitement, frightening, action, mystery, and thrill rides. On the other hand, if we talk about futuristic themes; it will be Technology Park, discovery, science exploration, robotics, and fiction.
We can see International village, charming spots, world exposition, etc in a theme where the main topic is the “World”. A theme show “Nature” consists of animals, landscaping, marine life, horticultural scenes, floral views, ocean, wildlife, etc.
Fantasy themes are famous for their animation, different cartoon characters, kids’ attractions, children’s parks, fairy tales, magic myths, etc. Similarly, historic cultures demonstrate heritage, cultural village, etc. A theme with the topic “Movies” is famous for American shows, comedy, motion pictures, and stunt shows.

A water park is prominent for at least three water slides or flumes, a wave pool, food and retail zones & tube rides, a free-form pool, a lazy river, and a kids’ play area.
For its visitors’ attractions, other facilities like on-site transport (shuttle bus) to move visitors around the park; facilities for special needs such as ramps and elevators for access by wheelchairs and baby strollers to make the experience of visitors more satisfying and enjoyable. Similarly, car parking facilities and lockers for visitors’ convenience and safekeeping of belongings play a vital role in the services.
More and more visitors are demanding the attraction of theme parks. Different factors play a vital role in the success of theme parks. Features that enhance the attractiveness of a theme park are the visitors’ experiences. Following are the main features that give a competitive market environment to a theme park.
Good location, quality, and consistency in services and facilities are the main features of a successful theme park. It should be a unique and interesting theme, having a clean and pleasant environment with well-trained staff. Successful theme parks have fun for all ages with their attractive and exclusive identity.
Its design and relating products are always innovative for high-tech attractions. Having visually attractive architectural buildings, scenery and characters play a vital role in its success. Special activities like rides and fireworks are also useful tools to add variety for its visitors, so they will visit again if they get a new and interesting thing.
After conducting surveys and study work, it is found that if old or tired, disorderly and generally unpleasant environment, visitors won’t visit a park. Hygiene and pleasing of the park is the main concern for visitors to have an enjoyable experience at the theme park. For example, Hong-Kong Disneyland, due to its location in a sub-tropical climate region with heavy rainfall, has more protected space than the other Disney Magic Kingdom Parks. The best example of a theme park which is under construction is Capital Smart City Islamabad’s theme park will be an excellent example due to its hilly locations and moderate climate. So, environment-friendly areas play a vital role in the attraction of theme parks’ design.